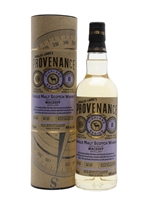 A 2008 Macduff single malt from indie bottler Douglas Laing, matured in a single refill hogshead for eight years, before being bottled in May 2017 as part of its Provenance series. Aromas of sweet malt, baking spice and aromatic flowers fill the nose, complemented by notes of vanilla toffee, porridge, cinnamon, nutmeg, ginger and pepper throughout the palate.