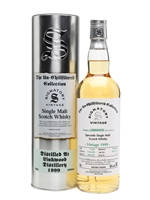 This 1999 vintage whisky comes from Linkwood, one of Diageo's workhorse distilleries. Aged for 17 years in a pair of hogsheads, this was bottled on 19 January 2017 for Signatory's Un-Chillfiltered Collection, and shows off the distillery's honeyed nature.