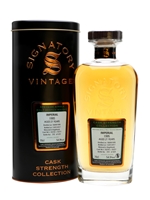 A 1995 vintage whisky from Imperial. This was distilled on 18 September, matured for 21 years in a pair of hogsheads and bottled on 13 January 2017 by Signatory for the Cask Strength Collection. The now-closed distillery produced a grassy style of spirit.