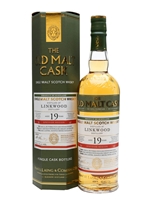 Linkwood is one of Diageo's workhorse distilleries and most production is used for its blends, though some does see the light of day as single malt. This 1997 vintage, 19 year old, is silky and rich with notes of blackcurrant and pineapple.