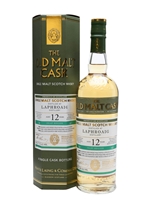 A 2004 vintage Laphroaig from independent bottler Hunter Laing as part of the Old Malt Cask series. Distilled in September, it was matured in a refill hogshead for 12 years before 324 bottles were yielded in February 2017. Buttery and peaty with notes of peach and seaweed.