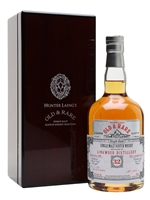 A 1989 Linkwood single malt from independent bottler Hunter Laing that was matured in a refill hogshead for 32 years, before being bottled in November 2021 as part of its Old & Rare series.