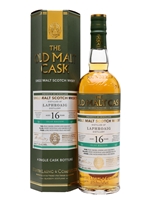 A sherry-matured smoke bomb from Laphroaig, distilled in February 2001 and bottled in April 2017 by Hunter Laing for the Old Malt Cask series. It was a refill butt, which has let the Laphroaig character shine through, combining classically fruity and coastal notes with rich sherry-cask fruit and spice.