In 1918 what would drive a young man to travel 3 months ALONE to Glasgow to learn and study. Well this is a Whisky Blog, yip “Whisky“.  The Godfather of Japenese Whisky “Masataka Taketsuru” made the lonely pilgrimage to Scotland in the early 1900’s to follow his dream and learn the craft of making Scotch Whisky.

Masataka wanted to learn from the world leaders and take his new found knowledge back to Japan to replicate and create a similar style of Whisky as Scotch.  His family had been in the Sake business for a couple of centurys, so spirit making was in his blood. His thirst for learning took him across Scotland, through most Whisky producing regions, enabling him to compare and take note of the small changes in process and equipment that can make big differences in character and flavour, finetuning his skills.

After his galivants, he settled back into study life at Glasgow’s University, and it was at his modest lodgings in Kirkintilloch he fell for Glasgow born Rita, love blossomed.  A few years after arriving in Glasgow Masataka Taketsuru graduated from Glasgow University and fully equipped with his Whisky production knowledge and a Scottish – soon to be bride – they returned to Japan to begin work on his dream.  Initally working for another spirit maker, finally in 1934 Masataka established Nikka Whisky, building his first distillery in Yoichi, Hokkaido, and the rest is history… 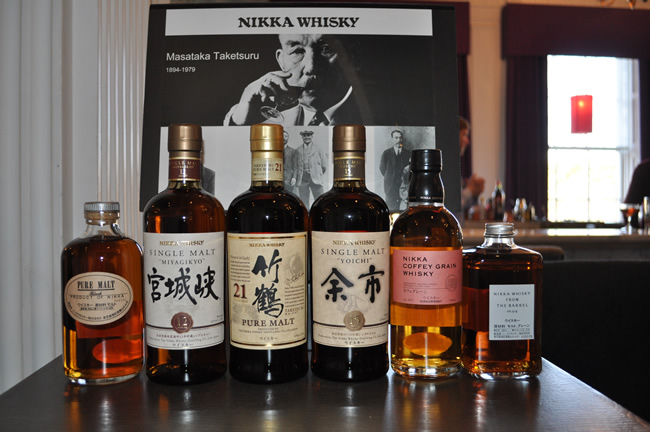 In the running to be crowned Nikka Whisky’s Bartender of the Year are:

Their first challenge of the day was for all finalists to prepare the perfect Nikka Coffey Grain Manhattan, they were to use their own recipes and wow the judges on presentation, flavour and use of the Nikka Whiskies.  The judges who had the “awful job” of sampling some of Europes finest cocktail makers wares were, Charles Maclean, a prominent Scottish whisky writer, Salim Khoury of the Savoy Hotel’s American Bar in London and Global Nikka representative Emiko Kaji from Japan.

Amaury Guyot’s Perfect Nikka Manhattan was made up of: 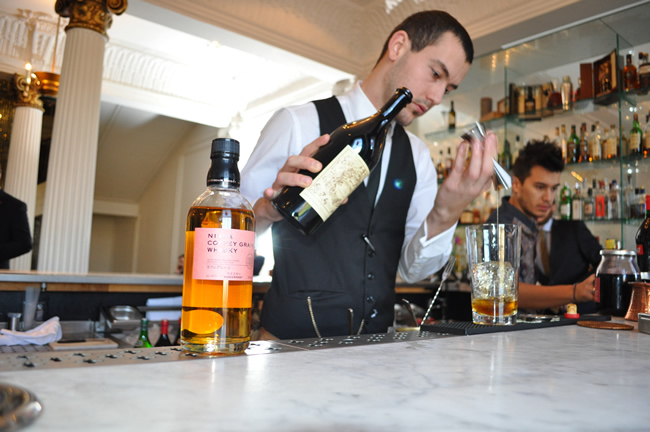 Each contestant demonstrated their abilities and skill on how to engage the customer (judge) and produce a cocktail to beat the other 5.  But the days main event was to take place after lunch, each finalist had to role play, in a situation set up by the judges, to mix, shake and stir their way to be the best.  Concocting perfect cocktails for each judge – one at a time – delivering their best chat and best Nikka Whisky cocktails. 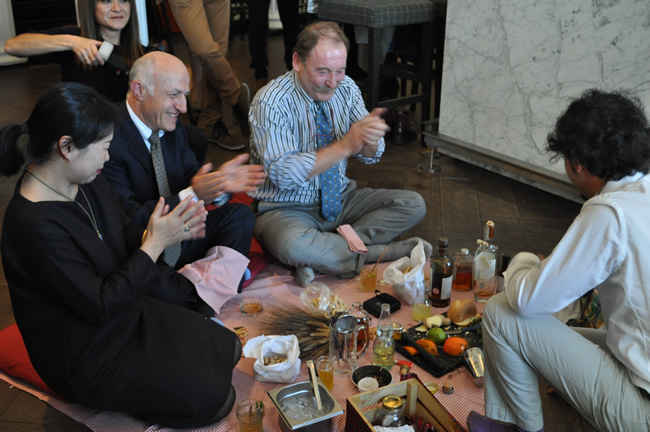 First up Italy’s Tommaso Colonna flambouantly produced a ‘pic-nikka’ blanket, basket and fine Italian foods to accompany his Whisky cocktails, Adam Hrapko had flown into Glasgow from Prague the day before accompanied by a perfect ice sculpture of a skull, in which he poured Nikka whisky through a hole on the top to allow the Whisky to flow out the skulls mouth – very impressive, and if you are quick it can be seen at the Pot Sill in Glasgow. Bubashvili Ilia served a delicious Nikka Cocktail from a large kettle and Adam McGurk was on top form with his quirky London vibe and delicious mint julip cocktail served in a copper cup. 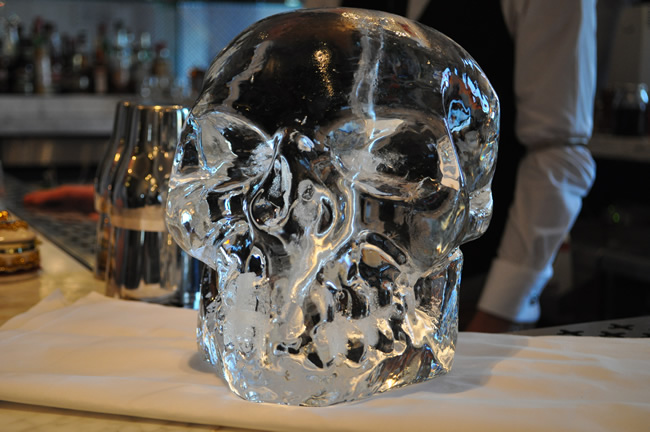 BUT all the gimicks, gadgets and flair really were no match for winner Amaury Guyot co-owner of the new Sherry Butt bar in Paris and runner up Doreen Philipp manager of the Falk’s Bar at Munich’s Hotel Bayerischer Hof who both produced immaginitive Whisky cocktails with no paraphernalia just charm and dynamite mixing skills.   Both winners had earned themselves a once in a lifetime trip to the home of Nikka in Japan to tour the two Nikka distilleries: Yoichi and Miyagikyo, and learn more about the brand.

The judges were impressed by Amaury’s technique, his natural attitude, and of course his cocktail skills. The judges all agreed that all the finalists showed incredible creativity, but what set the French bartender apart was his ability to really listen to the judges, and present personalized drinks according to the OMAKASE theme of the contest. 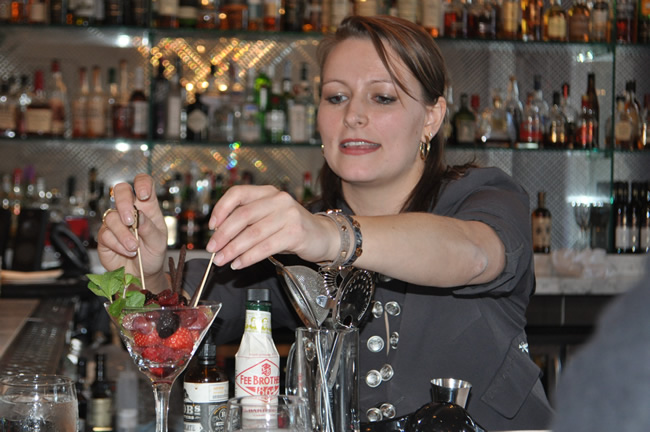 Japenese Whisky is soaring up the taste charts with many Whisky lovers and has a massive space in my Whisky cabinet.  The lighter less complex characteristics accompanied with the rich sherry notes found in many Japanese Whiskies is certainly my style of Whisky.

A huge thanks to the Liquorists for organising the event for Nikka, the Blythswood for hosting, the contestants for mixing some outstanding cocktails,  the judges for their wit, and of course Nikka for creating some amazingly tasty whiskies.

View the video of the event here…

Here’s to next year…