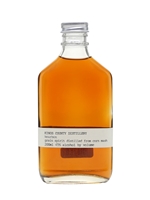 Made at New York's Kings County Distillery, this bourbon is made from local organic corn and British malted barley. This is rich and sweet with notes of vanilla, caramel, cinnamon and autumn spices.