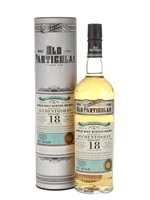 A 1997 vintage Auchentoshan from independent bottler Douglas Laing as part of their Old Particular series. The distillery is the only one in Scotland to triple distil every drop they produce. This is sweet and softly spiced with notes of tropical fruit.