From some of Jim’s previous blogs you can read about his visit to Kilbeggan Distillery ( the highlight of the trip) and his recent tasting of Tyrconnell Whiskey, but it is what happened on other not so quite Whisky related days.

Jim and his wife Jacqueline travelled over the sea to Ireland near the end of June 2010 and their first few days were in Donaghadee Co. Down with Jacqueline’s cousin Philip and his wife Lorraine, and this was our base for travelling around Co. Down.

Our biggest outing was down to Dublin where we stayed a few nights at the Castleknock Hotel, a great hotel if you can find it, if you know where the “back of beyond” is, then it is at the back of that.

From a previous blog you can read all about our wee trip over to Kilbeggan Distillery which is only a little over an hours drive from Dublin. 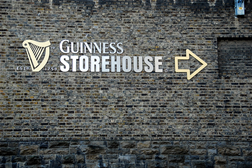 Brewery, Dublin and is Ireland’s number one international visitor attraction.  The cost to get in is 15 euro’s which also entitles you to a pint of Guinness either to pour yourself on level 5 or one poured for you at the top level in the Gravity Bar.

You can quite easily spend a good few hours within this attraction and at the base is a very well stocked shop packed with exclusive Guinness merchandise and memorabilia.

After our visit to Guinness we headed down to Grafton Street for some retail therapy and to find a nice restaurant for our evening meal.  After our dinner we headed back to our hotel and had ourselves a wee nigfh 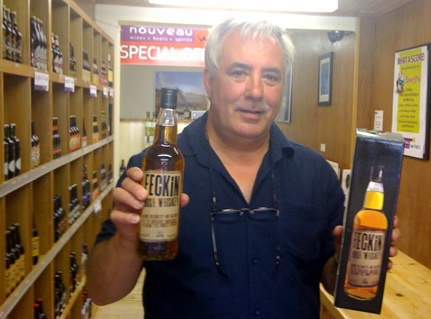 The next day we headed back up to Donaghadee for our last few days in Ireland.

Jim and Jacqueline borrowed one of Philip’s cars and took off for the day, shopping in Bangor and lunch down at Groomsport, where the went into a wine store called Nouveau Wines (www.nouveauwines.co.uk) and got chatting with Garth (owner/manager) who was so enthusiastic about wine and Whisky.

See the photo, he showed us of a bottle of “Feckin Irish Whiskey” and Garth’s comment was good name and label, pity about the contents.

Jim put on his Whisky Boy hat and had a long chat about Whisky with Garth and Jim really was taken by his knowledge and enthusiasm. Garth did mention that he sometimes comes over to Scotland for the rugby, and Jim gave him one of the Whisky Boy’s cards and told him he has an open invitation to a Whisky tasting the next time he visits Scotland.

At the end of our day out Jim and Jacqueline popped into Grace Neill’s for a light refreshment or two, Jim had a pint 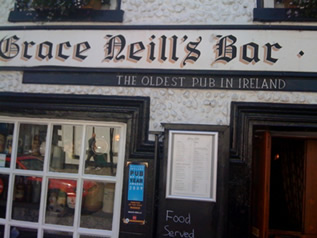 of Guinness and it was the best pulled pint of our whole trip, even better than any down in Dublin and that included the Guinness Storehouse, so Jim’s top three places for a really great pint of Guinness is (in no particular order) Rogano’s Restaurant, Glasgow. Grace Neill’s Donaghadee. Gleneagles Hotel Auchterarder, Perthshire. hoping to add to this at every opportunity.

A wee bit about Grace Neill’s which is reputed to be the oldest pub in Ireland, and when you enter you find yourself in a dark old bar with a low ceiling and booths, but when you go straight through you find yourself in the very modern part with a well lit lounge and restaurant. If only to try the Guinness it is well worth a visit.