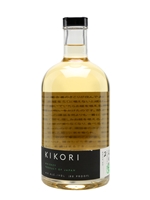 Kikori Whiskey, despite being from Japan, is a brand produced for the American market (hence the 'e' in whiskey). Made entirely from rice, and therefore a single grain whisky, this is aged for three years in a combination of American- French- and ex-sherry-oak. This has notes of melon, almond, apple and wood spice, and lends itself to use in cocktails, as well as on its own.