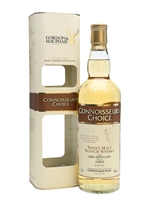 Distilled at Isle of Jura on the eponymous island in 1997, this was bottled in its mid-teens in 2013 for Gordon & MacPhail's Connoisseurs Choice series. A typically fruity and spicy whisky from this distillery.