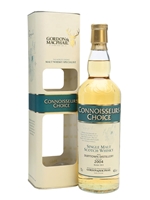 A 2004 vintage whisky from Dufftown, the town said to be built on seven stills. Aged for around a decade, this was bottled by Gordon & MacPhail for the Connoisseurs Choice series in 2014. Whiskies from this distillery are known for their fruitiness.