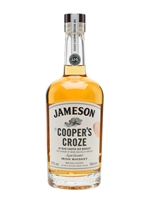 The Cooper's Croze is part of Jamesons' The Whisky Maker series and has been selected by head cooper Ger Buckley to highlight the role wood plays in whiskey maturation. Using a combination of virgin oak, bourbon barrels and sherry casks, this has notes of vanilla, rich fruit and spice.