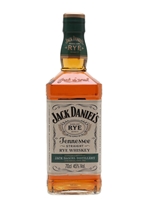 Welcome to the first new Jack Daniel's whiskey since before Prohibition. Tennessee Straight Rye is made from 70% rye, 18% corn and 12% malted barley, and is put through the same charcoal filtration process as Jack Daniel's bourbons. The result is a mellow and sweet whiskey that's enlivened with distinctive rye spice.