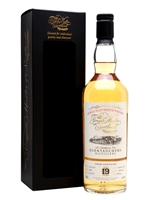 A single bourbon barrel of 1997 whisky from rarely seen distillery Glentauchers, aged in for 19 years. Glentauchers keeps less than 1% of its spirit back for bottling as single malt, with the rest going into owner Pernod Ricard's blends, particularly Ballantine's.