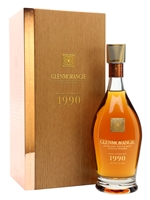 1990 is the first release in Glenmorangie's Bond House No.1 Collection, which will be a series of single-vintage whiskies. This has been aged in a combination of sherry and bourbon casks and is creamy and elegaant with notes of orange, vanilla and menthol.