It was with great delight that I received an invitation to the global launch of the Midleton Very Rare 2017 which was been held at Midleton Distillery near Cork, this invite was an easy one to say a big yes too.

This 2017 Vintage Release blend was created by master distiller Brian Nation, comprises single pot still and grain Whiskeys drawn from a batch of ex-Bourbon barrels with an age span of 12 to 32 years.

At the launch which was held in the warehouses at the Distillery all the guests were initially split into groups of eight to then sample selected past Very Rare releases. I was in the group led by David Quinn (Head of Whisky Science), he had four releases from past years and gave us a grand tasting, he had such a wealth of knowledge but also made the tasting fun. 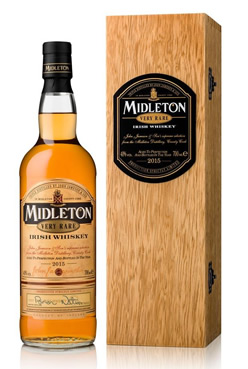 Now , lets do some tasting.

Nose…Sweet fruit in abundance, lively yet balanced, some Caribbean fruits as well as apples, almonds making an appearance.

Taste…Smooth and elegant, more intense fruit, cotton candy, a wee citrus burst, along came some spices ginger and some mild white pepper, could sip this all day.

Another triumph from Midleton. Great job from Brian Nation and his team.