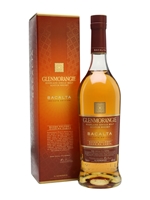 Bacalta is the eight release in Glenmorangie's annual Private Edition series. Finished in casks which were seasoned with Malmsey Madeira, this is rich and fruity with notes of caramelised apricots, dates, almonds and honeycomb.