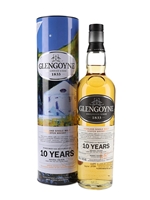 The fourth and final special edition in a series that is supporting the Glasgow School of Art after it was afflicted by two successive fires. This edition is themed around summer at the distillery and every bottle contains a print of the painting 'Summer Eveninglight at Glengoyne Distillery' by John Lowrie Morrison (Jolomo).

The whisky inside is Glengoyne 10 Year Old, which has notes of fresh green apples, toffee and a hint of nuttiness.