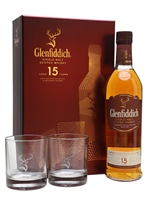 A great gift for those discovering the delights of Speyside single malt whisky, as well as existing Glenfiddich fans. This 15 year old whisky has been aged in a Solera system - mostly commonly used in the maturation of sherry - which allows the distillery to marry together two different types of casks (European oak sherry and new oak). The result is a golden whisky with complex notes of heather honey, rich dark fruits, marzipan, sherry and spices.