Well it did not take Dougie long to give me the call, it was last night, he said ” I am just about to open the bottle of Glenrothes Whisky – 1994 Single Speyside Malt, do you fancy doing a wee tasting”, Jim was round at Dougies before he had put the phone down.

Don’t tell Nicola that Jim and Dougie fitted in a sneaky wee tasting without her. (She will probably find out soon enough)

At our tasting of Glenrothes Select Reserve at the end of October, Dougie did say he had bought a bottle of 1994. It was at this point we put this wee dram further up our tasting list, and yes, Monday 9th November was the night it was opened.

The bottle is the same as the Select Reserve, but the packaging is slightly more robust.

The Glenrothes distillery was established in 1878, with production commencing in December of the following year, on the same day as the infamous Tay Bridge disaster. James Stuart, one of the original founders (and the Macallan leaseholder at the time) had already quit the business due to financial difficulties before the stills started running, leaving his partners Robert Dick (a banker) John Cruickshank (a lawyer) and William Grant (another banker, not the Glenfiddich/Balvenie William Grant) to pick up the pieces as a new company, William Grant & Co.

The new distillery became Glenrothes-Glenlivet in 1884, before William Grant & Co. amalgamated with the Islay Distillery Co. (owners of Bunnahabhain) in 1887 to become Highland Distillers Company (HDC). Glenrothes suffered two fires and an explosion that wrecked most of the distillery buildings in the period between 1897 and 1923, but managed to emerge stronger each time, with capacity being doubled during the first rebuild in 1898.

After a few decades of quiet achievement, there was further expansion to come between 1963 and 1989, by the end of which time the distillery boasted ten stills and a capacity of over five and a half million litres/year. During this time (and to this day) the vast majority of Glenrothes’ malt went into the Cutty Sark and Famous Grouse blends, and very few bottlings of Glenrothes single malt seem to have been available, although Gordon & Macphail were doing an 8 year old from at least the 1970s and there was an official 12year old in the 1980s.

Nowadays, Glenrothes has a much higher profile, following the distillery’s acquisition in 1999 (for over £600 million) by The Edrington Group and William Grant & Sons (the other William Grant, the ones who own Glenfiddich & Balvenie). There have been myriad releases of Glenrothes since, but rather than age statements each release is from a specific vintage. This approach, along with the distinctive packaging and the rich, smooth, structured nature of the malts, has contributed to the great success of Glenrothes since it changed hands.

Lets get down to the business of tasting. 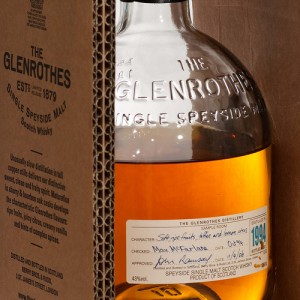 Nose…A lovely malt, sherry and fruit with honey and vanilla.
Taste…Medium bodied, smooth with a slight sherry and an even lesser hint of spice.
Finish…Medium long with a sweet yet salty tang with a hint of citrus.

Nose…A mild dash of honey with plenty of citrus fruit and some caramel/toffee.
Taste…Soft and a bit fruity, very smooth, can I taste ha little liquorice and a hint of smoke, maybe it’s just me.
Finish…Long and fruity it has been a pleasure to know you.

Well again a smashing wee dram, but Jim and Dougie could not stop ourselves from comparing it with Glenrothes’s Select Reserve. On balance from the two tastings both Jim and Dougie gave our vote to the Select Reserve.
But don’t let that put anyone off from buying either of these bottles, both are exceptional Whiskies, we think that you should possible keep the 1994 for an after dinner dram. We will be.

Happy dramming, from The Whisky Boys, Jim, Dougie and Nicola.