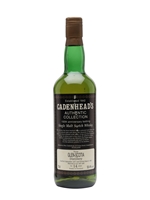 A release of 14 year old whisky from Glen Scotia, bottled by famed independent Wm Cadenhead. This was distilled in 1977 and bottled in 1992 in celebration of the company's 150th anniversary.
Please note that this is an old bottle and the closure may have deteriorated; care should be taken when opening the bottle. As such, the item is sold as described.