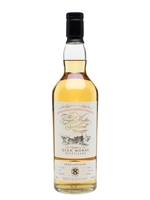 A young eight-year-old Glen Moray from The Single Malts Of Scotland. This was distilled in 2007 and bottled in August 2016 from a barrel.