It is Wednesday 8th of June and the time is 8 pm. The Whisky Boys have organised a blind Whisky tasting and invited 8 guests to the Canal Inn in Camelon, Falkirk. 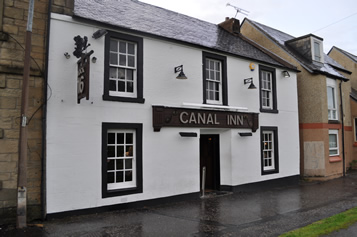 Jim Watt a regular in the Canal Inn and a sought after speaker at Burns Suppers, Jim works at the large Prudential offices on the outskirts of Stirling.

Keiran Wilkinson the son of Colin, married and regularly works in the oil industry, offshore.

Jim Graham a work colleague of Whisky Boy Jim, and used to work with BT, and Robert was 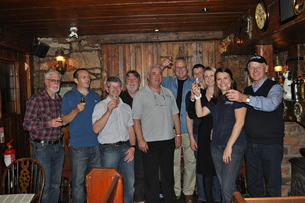 one of his workmates, small world.

The Whiskies chosen for the blind tastings were: 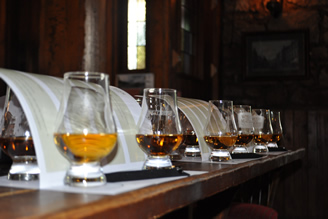 Jim and Nicola had the table all set out for the “blind tasting session” glasses containing the above drams, oatcakes, milk and plain chocolate and a couple of water jugs.

The evening started with The Whisky Boys welcoming all the guests to the Canal Inn and introducing them all to each other, this was soon followed by Nicola explaining the evenings event and timetable.

The Whisky Boys had compiled tasting notes for each of the four drams, so the challenge was to marry the drams with the tasting notes, so the guests were given approx. half an hour to do this task.

There was a break around 9.15 pm and some great sandwiches and sausage rolls were laid on for all the guest and there were even some left that we handed up to the bar for the Inn’s regulars to enjoy.  During the break Jim and Nicola did the scoring, the results would be revealed after the Whisky Label Quiz that was coming up soon. 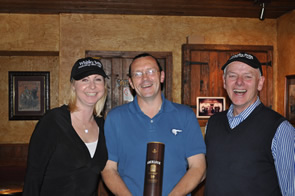 Before the quiz Nicola handed out the bottles that everyone tasted and the guest tasters were asked to visit again their favourite of the night.

Everyone was enjoying the drams and certainly the chat was non stop, so The Whisky Boys gave out the Label Quiz which entailed the guests recognising the image of part of a Whisky Label and writing down their answers.

The drams were going down well and Jim and Nicola were marking the answer sheets and working the winners and the losers.

The dram that got the most comments was the blend ( Naked Grouse ) everyone thought it was a fabulous dram and they all asked the Whisky Boys where they could buy a bottle or two, Jim and Nicola  soon gave them the price and also where to go.

In third place was Alex Milne who scored a total of 10 points. (Alex managed 4 out of 4 for the Whisky tasting section) Alex received a Whisky Boys baseball cap for his efforts. 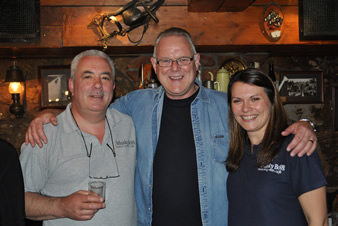 There was a tie for first place between Lee Madigan and James Farrelly with 12 points each.
Nicola then asked the tie break question, which was, guess the price of a bottle of Bowmore 12 Year Old on Master of Malt’s website, James won by being just under £2 away form the correct price of £26.68.

The evening was very quickly over, and The Whisky Boys were pleased to receive all the thanks from our guests, as they all said the had a fabulous evening and asked when is the next one.

Both Jim and Nicola had a ball and really enjoyed laying on this great tasting event, and give thanks to their spouses ( Jacqueline and Scott ) for all their help. Also a BIG THANKS goes to Robert Heeps for allowing us to use the lounge area of his bar and for the beers he supplied.