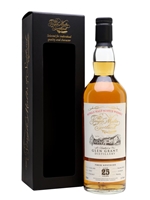 A typical example of fruity and spicy Glen Grant. Distilled in 1992 and aged in a single bourbon barrel, this was released by Elixir Distillers in March 2017 at 25 years of age.