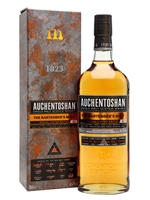 The first edition of Auchentoshan Bartenders Malt was created by 12 competition-winning bartenders. Comprised of whiskies distilled between the 1970s and the early-2010s, this has notes of brioche, milk chocolate and dark apricots.