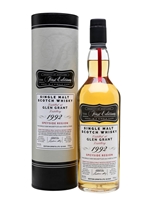 A 25-year-old whisky distilled at Glen Grant in 1992 and bottled for Hunter Laing as part of the First Editions range. It's a sweet and fruity dram with notes of apples, pears, fudge and milk chocolate.