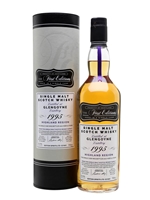 Marzipan, vanilla and dark chocolate are three of the flavours in this 21-year-old Glengoyne. Distilled in 1996, it was aged in a refill barrel.