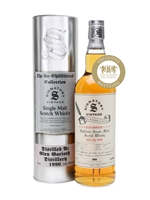 A bottling of 26-year-old, 1990-vintage Glen Garioch by Signatory, specially selected by our team and released at The Whisky Show: Old & Rare in February 2017. Following the theme of the show, it's an old fashioned Glen Garioch, produced when they still had a bit of smokiness in their malt. That's become integrated and adds a rich and spicy backbone to this fruity dram.