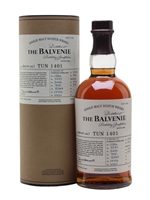 Batch 7 of Balvenie's Tun 1401 series. Named after David Stewart's favourite marrying vat, this was a vatting of nine American oak Bourbon casks and two European oak ex-sherry casks. This was a duty free only release which came to market in March 2013.