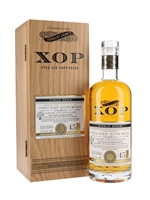 A 1974 Garnheath single grain whisky, matured in a single refill cask for more than four decades, before being bottled by Douglas Laing in August 2019 as part of its Xtra Old Particular series. Aromas of creamy vanilla, red fruit and apple turnovers fill the nose, and the palate offers notes of apricot, toffee, buttered corn and icing sugar.