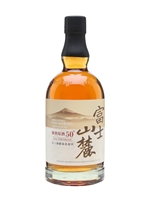 Kirin whiskies don't often make it out of Japan, so we're delighted to have found a few bottles. Released in 2016, Fuji-Sanroku is a sweeter style of whisky with notes of chocolate, vanilla and caramel.