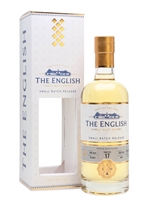 Chapter 17 from the English Whisky Co. is a tasty triple-distilled single malt. Only available as a limited edition, this is rich, creamy and chocolatey with a hint of citrus.