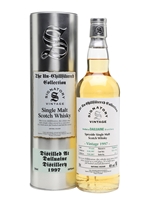 A 1997 Dailuaine bottled by Signatory for the Un-Chillfiltered Collection. Distilled on 21 May, it was aged for 19 years in a pair of hogsheads before being bottled on 19 January 2017. Dailuaine whiskies are noted for having notes of pepper and oranges.