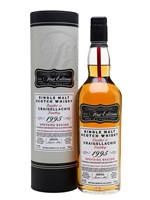 This 1995 Craigellachie has been released as part of Hunter Laing's First Editions series. Aged for 20 years in a sherry butt, this is creamy with notes of vanilla tablet, green apples and raisins.