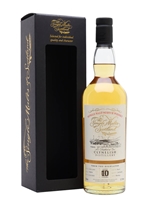 A 2010 Clynelish single malt from indie bottler Elixir Distillers, matured in a single ex-bourbon barrel for a decade before being bottled in October 2020 as part of its Single Malts of Scotland series. Aromas of fruit pastilles, cloudy apple juice and white lilies fill the nose, complemented by notes of dried fruit, sticky dates, pear chutney, oak char and sweet banana bread throughout the palate.