Tales from the Terminal – Edinburgh to London Heathrow 27th Oct 2008

Just like to say a big hi to Ben whom I met on the Heathrow flight on Monday. Me, going to my work, Ben on a mission for the Forestry Commission.

We spent the whole flight discussing various alcoholic beverages and, although he is a Whisky lover like us, he intrigued me with some of the potions he has tasted in his world travels, especially his gin / Whisky concoction from Holland, what was it called again? 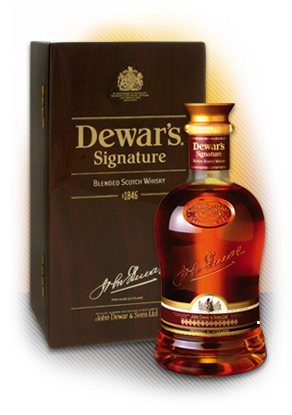 At the same time I was filling his head with my tasting of Signature a fantastic De luxe blend from Dewar’s designed by the outgoing master blender at their distillery in Aberfeldy. What a high note to leave on.

This dram was first brought to my attention by my other Whisky loving pal, Dougie Bell, who spends a lot of his spare time at his holiday chalet in Kenmore a beautiful part of the Perthshire countryside. Kenmore is situated close to the Aberfeldy distillery. Dougie Bell and his beloved are frequent visitors to the Courtyard Restaurant, where the barman offered to sell him a dram for the princely sum, or should it be the kings ransom of £32.50 (and this would not include a mixer if required), and Dougies reply to this was unprintable.

On receiving this tale of such an expensive nip, it transpired that the cost of a litre bottle at Aberfeldy Distillery is £150.00 and / or £195.00 to buy on line. But whilst I was at terminal five on the following Friday making my regular purchases of Dewar’s 12 Year Old Special Reserve (Superb!) I enquired of the assistant about the Signature Whisky in question , only to be shown right under my nose, sitting in its, eye catching, highly polished box with a price tag of only £75.00, and furthermore, would I like to sample it? Well at terminal five the samples come in proper Whisky tasting, nosing glasses, (not the little plastic thimbles used elsewhere which gave this spellbinding spirit a full chance to express its true self.

This tasting left me with no other choice but to purchase one , or two of the beauties as it turned out (ps don’t tell the delightful Catherine , she thinks I only bought one).

I hurriedly made off with my valuable and precious cargo to catch my flight home.

Therefore, to Big Ben I hope you managed to get a special dram or two added to your expense account , if so let me know the next time our paths cross or via the Whisky Boys web site. Cheers!!!!