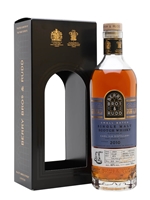 A small-batch 2010 Caol Ila single malt from indie bottler Berry Bros & Rudd, matured in a hogshead until 2021, when it was released as part of its Winter 2021 Releases. Aromas of earthy smoke, icing sugar, crystallised sea salt and TCP fill the nose, complemented by notes of tar, peat smoke, salty seaweed and floral heather throughout the palate.