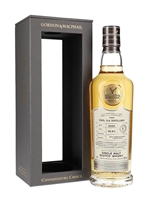 A 2005 Caol Ila single malt that was matured in a single refill sherry hogshead for 14 years, before being bottled by Gordon & MacPhail in September 2019, as part of its Connoisseurs Choice series. Soft smoke mingles with aromas of ginger, orange marmalade, vanilla and Brazil nuts on the nose. The palate offers notes of golden syrup, green apples, malted biscuit and cocoa powder, developing hints of toffee, dark chocolate, zesty lemon and rich smoke that linger in the finish.