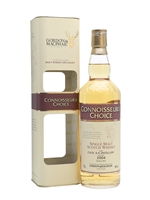 A 2004 vintage Caol Ila from independent bottler Gordon & MacPhail as part of the Connoisseurs Choice series. This was aged for around 12 years in bourbon barrels before release in 2016.