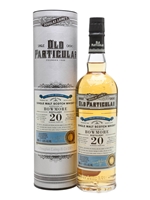 A 1996 vintage Bowmore from independent bottler Douglas Laing as part of the Old Particular series. Distilled in December, it was aged in a refill hogshead for 20 years before 291 bottles were yielded in August 2014. Sweet, spicy and smoky.