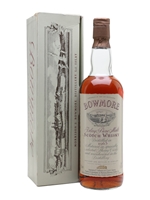 A 1965 vintage Bowmore bottled in the 1980s for the Italian market with an old style label. This was distilled in the golden years shortly after the Morrison's takeover and was matured in sherry casks.
Please note that this is an old bottle and the closure may have deteriorated; care should be taken when opening the bottle. As such, the item is sold as described.