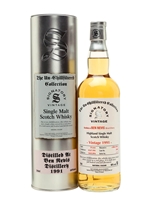 A 24-year-old-Signatory bottled whisky from Ben Nevis distillery in the Highlands of Scotland. This has been bottled without chill-filtration after maturing in a sherry butt - distilled on 5 July 1991 and bottled on 26 February 2016. Ben Nevis whiskies are known for their notes of vanilla and honey.