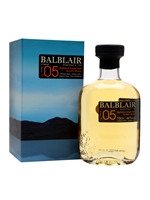 This is the second release of 2005-vintage whisky from Balblair, bottled in 2017. The distillery is one of few to bottle by vintage rather than age, and this is sweet and spicy with notes of toffee and vanilla.