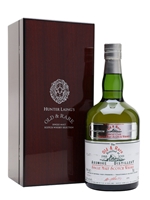 A well-aged whisky from Ardmore bottled by Hunter Laing for the Old & Rare range, showing off a different side of Speyside character – smokiness. Ardmore is well known for being one of the few Speysiders that focus on smoky whisky, and this 31-year-old 1988-vintage shows how that has developed after more than three decades in cask. It's still meaty, smoky and oily, but the age has softened the smoke into a leathery cape.