The Whisky Boys like the look of this new spirit, we shall try and get our hands on some and let you know our tastings, but at 65% Alc/vol it may need quite a wee bit of water to calm it down.

Cooley to bring Poitín out of the Shadows

Cooley Distillery, the European Distiller of the Year, has launched a new range of Poitín products to showcase the traditional Spirit of Ireland.

The origin of distilling in Ireland dates back over 1,000 years. Before there was Irish whiskey there was Poitín – a clear Irish spirit famous for its alcohol strength. In homage to this ancient Irish Spirit, Cooley Distillery, Irelands only independent whiskey distiller, has released an Origin series of Poitín products to revive the traditional Spirit of Ireland. 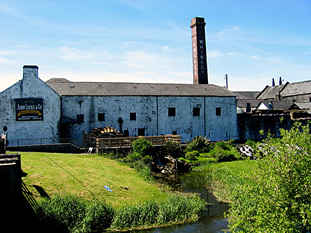 Poitín was traditionally distilled in a small pot still and the term is a derivative of the Irish word pota, meaning “pot”. Normally distilled from barley grain or potatoes, it is one of the strongest alcoholic beverages in the world and for centuries was classified as illegal in Ireland. Poitín is one of the most long-established spirits in the world with a rich and varied history and is exclusively associated with Ireland.

Jack Teeling, Managing Director of Cooley Distillery, commented, “Poitín is at the origin of Irish Spirits and Irish whiskey in particular. Over the years it has been demonised because it was illegally produced and the end product lacked consistency, quality and credibility. We have produced a quality Poitín product using ancient techniques in our award winning distillery allowing consumers of today try this ancient Irish spirit with confidence as they are getting a high quality product.”

Cooleys’ first Poitín release is triple distilled in small copper Pot Stills from a traditional Irish Pot Still recipe of malted and unmalted barley. Bottled straight from the still with no maturation produces a surprisingly smooth spirit even for one that is bottled at 65% abv. Poitín like any quality white spirit lends itself to be consumed in a variety of ways, neat, with water, with mixers and as a component of cocktails but due to its alcohol strength it should be enjoyed in moderation.

“As Poitín is basically un-aged Irish whiskey spirit and we hope to revive the Poitín as a national product. A lot of other countries around the world celebrate and market their national high alcohol spirits. Brazil (Whisky in Brasil is also growing rapidly..) have Cachaca, Greece Ouzo, Bulgaria Rakia and the Czech’s have successfully revived Absinthe after it was effectively outlawed for over 75 years. We want to bring Poitín out from the shadows and let Irish people have a national white spirit they can be proud of,” continued Teeling.

Consisting of only 1,800 bottles this small batch release will be initially available through the Celtic Whiskey Shop and Dublin Airport as well as through good independent off-licenses.