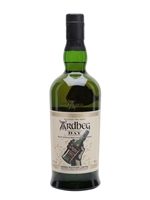 The 2012 Islay Festival release from Ardbeg, although with a slight twist to usual - not only was it available from the distillery but also from Ardbeg Embassy shops, of which TWE is one. It's matured in refill sherry casks that were previously used for Uigeadail and bottled at 56.7%.