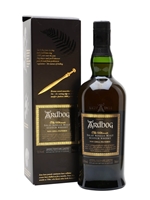 The 2013 Ardbeg Day whisky is called Ardbog, released on June 1st initially as an Embassy exclusive. Taking inspiration from their last few releases, this is a down-to-earth whisky, concerned with the history uncovered as you dig deep into the peat bogs of Islay. The whisky is a vatting of 10 year old spirit, some matured in bourbon casks and some in manzanilla casks for a balanced of soft, sweet and earthy flavours.World Whiskies Awards 2014: Best Islay Whisky NAS.